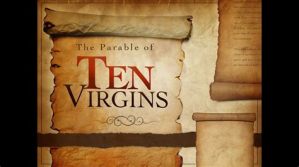 “Then shall the kingdom of heaven be likened unto ten virgins, which took their lamps, and went forth to meet the bridegroom.”  Matthew 25:1

The kingdom of heaven symbolizes the realm of the mind. It is likened unto ten virgins because the number ten is associated with the mind, which enters a virgin state through its purification.  The quieting of the mind is an eastern practice that aids in the purification of the mind, which is encoded in both the Old and New Testament.  Moses instructs the children of Israel, chosen to represent us the people, to stand still (Exodus 14:13), the word still meaning be silent, quiet self.  In the book of Revelation, we learn that the seventh seal is opened through silence in heaven, which symbolizes the mind. Through silence in the mind the seventh chakra is opened, connecting us to the divine power of the heart.  When we quiet our mind, following Moses’ instruction, we give power to what Moses symbolizes, which is the holy Spirit.  And as the Spirit of God moved upon the waters in the Creation, and upon the waters of the Red Sea, the holy spirit, if not resisted, will move upon the spiritual waters, symbolizing the thoughts of the mind, influencing the thoughts of our mind, causing us to think differently, the deeper spiritual meaning of the word, repentance.  John baptized unto repentance; a baptism that illustrated the purification of the mind, which the ten virgins symbolize.  Jesus gives the instruction through his cleaning of the cup and platter parable, the cup symbolizing the mind.

Israel, like heaven, symbolizes the Mind, which consisted of ten tribes, descending from the first ten sons of Jacob; those born of Leah and the bondmaids, symbolizing flesh and bondage. It is through the judging of these ten tribes that are mind is made pure, preparing the way for the coming of the Lord, as the ten virgins were prepared to meet the bridegroom, and as Esther was prepared to meet the king through a purification process “…for so were the days of their purifications accomplished, to wit, six months with oil of myrrh, and six months with sweet odours…” Esther 2:12.  The oil symbolizes the anointing; the spiritual anointing through which the mind and the heart are made pure.  The word myrrh means distillation, the purification of water, which like the sea, symbolizes the thoughts of our mind.   “Then shall the kingdom of heaven be likened unto ten virgins, which took their lamps, and went forth to meet the bridegroom.” Matthew 25:1.  The kingdom of heaven symbolizes the realm of the mind.  The lamps symbolize the hearts of those that have purified their minds and those that think they have purified their minds. “And five of them were wise, and five were foolish. They that were foolish took their lamps, and took no oil with them:” Matthew 25:2,3.  This is where we see what separates the wise virgins from the foolish virgins.  The five wise had oil in their lamps, symbolizing the anointing that is within their hearts.  The five foolish virgins represent those that think they have been made pure, but having no oil, being without the anointing, have been deceived.  “But the wise took oil in their vessels with their lamps.” Matthew 25:4.  The five wise are those that have not been deceived by a false doctrine, which would be any doctrine or belief that teaches purification of the mind through any other way than what Jesus taught, which is through the heart by way of the spiritual oil or anointing of the heart.  The mind does not have the power to bring us into the pure spiritual state symbolized by the virgin.  We are not made pure by thinking positive thoughts, or by repeating some mantra.  We can only be made pure through the spiritual anointing or christ power of the heart, the oil that the five foolish are lacking.

“While the bridegroom tarried, they all slumbered and slept… (According as it is written, God hath given them the spirit of slumber, eyes that they should not see, and ears that they should not hear;) unto this day…” Matthew 25:5.  The bridegroom, symbolizing spiritual truth, has been delayed for more than fifteen hundred years due to religious iniquity; the spiritual veil that has rendered the spiritual mind unconscious, possessed by the spirit of slumber.  “And many of them that sleep in the dust of the earth shall awake, some to everlasting life, and some to shame and everlasting contempt… And they that be wise shall shine as the brightness of the firmament; and they that turn many to righteousness as the stars for ever and ever.”   Daniel 12:2,3.   The dust of the earth symbolizes the spiritual inactivity of the heart; the spiritual power of the heart still lying dormant.  But some will awaken out of this dormant state and begin their heart-purification process.  They are the wise, having oil in their lamps.  “And at midnight there was a cry made, Behold, the bridegroom cometh; go ye out to meet him. Then all those virgins arose, and trimmed their lamps. And the foolish said unto the wise, Give us of your oil; for our lamps are gone out. But the wise answered, saying, Not so; lest there be not enough for us and you: … but go ye rather to them that sell, and buy for yourselves.”  Matthew 25:6-9.  Midnight. The twelfth hour, the number twelve representing judgment. Those who are purifying themselves through God’s spiritual judgment (Matthew 19:28) have entered the bedchamber, where the spiritual seed of spiritual truth is being sown.  “And while they went to buy, the bridegroom came; and they that were ready went in with him to the marriage: and the door was shut.”  Matthew 25:10.  Marriage is intercourse; a spiritual intercourse through which the holy seed or word of truth is sown in our heart.  The door of the bedchamber is open to those that are believing, obeying, or putting action to the spiritual works outlined in the churches in the book of Revelation, and closed to those that are not.  “And to the angel of the church in Philadelphia write; These things saith he that is holy, he that is true, he that hath the key of David, he that openeth, and no man shutteth; and shutteth, and no man openeth; I know thy works: behold, I have set before thee an open door…”   Revelation 3:7,8.  The door is open to those who are purifying themselves through the spiritual works of God’s Word.  “Afterward came also the other virgins, saying, Lord, Lord, open to us. But he answered and said, Verily I say unto you, I know you not.”  Matthew 25:11.  These, believing the iniquity they have been taught through the church, think they have purified themselves, but they have climbed up some other way.  The word “know,” or “knew,” is intercourse. Adam knew Eve and she conceived.  God’s holy seed cannot and will not pass through the veil of religious iniquity.  “And then will I profess unto them, I never knew you: depart from me, ye that work iniquity.  Matthew 7:23.